The husbandry committee’s initial project will involve an interactive participation with US breeders to establish a “ Cria Fetal Weight Gain” curve, in order to establish normal, and abnormal weight trajectories, as a means of early identification of growth, health and nutritional problems. 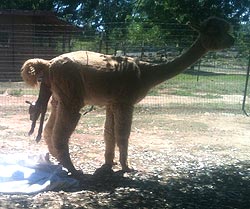 There are a good deal of data showing that early development in small ruminants can be complicated by “ill thrift”. Cria loss is still a relatively common occurrence and evidence of clinical illness, such as parasitism, inadequate maternal lactation, mineral deficiencies, etc. are often manifestations of later disease, more easily identified through a graphic representation by falling centiles in weight than by physical signs of illness. There are currently no resources to help the industry stakeholders identify the expected trajectory of normal weight gain in those important early months that the cria is developing immunity and resilience.

Likewise, issues relating to husbandry practices might influence both individual and herd health. The cria population is the most “at risk” in the herd and the most frequently weighed, and as such, multiple occurrences of poor growth might earlier identify and create herd alerts for everything from feed, to parasite and viral infections. The savings in herd health and fiber production are incalculable.

By use of an accompanying questionnaire, it is hoped that this initial initiative can then be dissected, in the future, to provide information that might be useful for subjects such as: 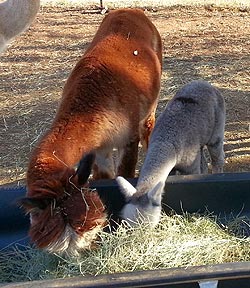 It is hoped that further analysis might be part of a continuing database that will provide the alpaca farmer with analytical data that will facilitate cost effective, “best management” practices and potentially identify early “herd alerts”. When coupled with data from regional sites, that same data could potentially identify regional alerts if there is “clustering” of neonatal complications.

The cria is the most vulnerable member of the herd and the window into our “maiden voyage” into alpaca health and welfare. If we are able to recruit enough participation, we feel that we can provide valuable information.

Participants are welcome to enter the data for their previous cria (if they have the information recorded) as this will help us achieve “statistical significance” that much sooner. Feel free to add established weights from your individual cria to the database.