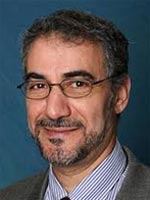 Dr. Tibary graduated in 1980 with a Doctorate in Veterinary Medicine from the Institut Agronomique et Vétérinaire in Morocco. He earned his MS (1984) and PhD (1989) in Theriogenology (Reproductive Medicine and surgery) from the University of Minnesota and was board certified as a Diplomate of the American College of Theriogenologists in 1991.

Dr. Tibary started his career in Morocco and maintains an ongoing affiliation with the university there, teaching and doing research on large animal Theriogenology. Dr. Tibary worked as a Clinical Assistant Professor of Theriogenology at the University of Minnesota from 1990-1991. He then accepted a position as the Scientific Director of the Veterinary Research Center in Abu Dhabi in the United Arab Emirates where he helped develop a referral center for infertility and artificial breeding in Arabian horses and camels. In 1998, he joined the College of Veterinary Medicine at Washington State where he is now a professor and head of the Comparative Theriogenology service providing clinical service and conducting research in equine, camelids and ruminants reproduction.

Dr. Tibary devoted most of his career to teaching Theriogenology and conducting applied research on equine, ruminants and camelid reproduction. He served as the resident veterinarian and veterinary consultant to the Royal stables and the National Stud Farms in Morocco and the Amiri stable in Abu Dhabi (UAE). He received several awards recognizing his excellence in teaching and clinical practice including the Norden Distinguished Teacher Award (2001 and 2005), the faculty member award by the Washington State Veterinary Medical Association (2003) the North African Veterinary Achievement award for contributions to equine practice (2006) and the Veterinary Achievement Award by the Alpaca Research Foundation (2007). He was named 2011 Theriogenologist of the Year by the American College of Theriogenologists. Dr. Tibary provided large animal reproductive medicine continuing education programs for veterinarians around the world. He is the author of over 150 scientific and lay articles. Dr. Tibary is the author of 5 books and several book chapters on camelid, equine and ruminant reproductive medicine and surgery. He is an active member of the Society for Theriogenology, American Association of Equine Practitioners, American Association of Small Ruminant Practitioners, American Association of Bovine Practitioners and the International Embryo Transfer Society.